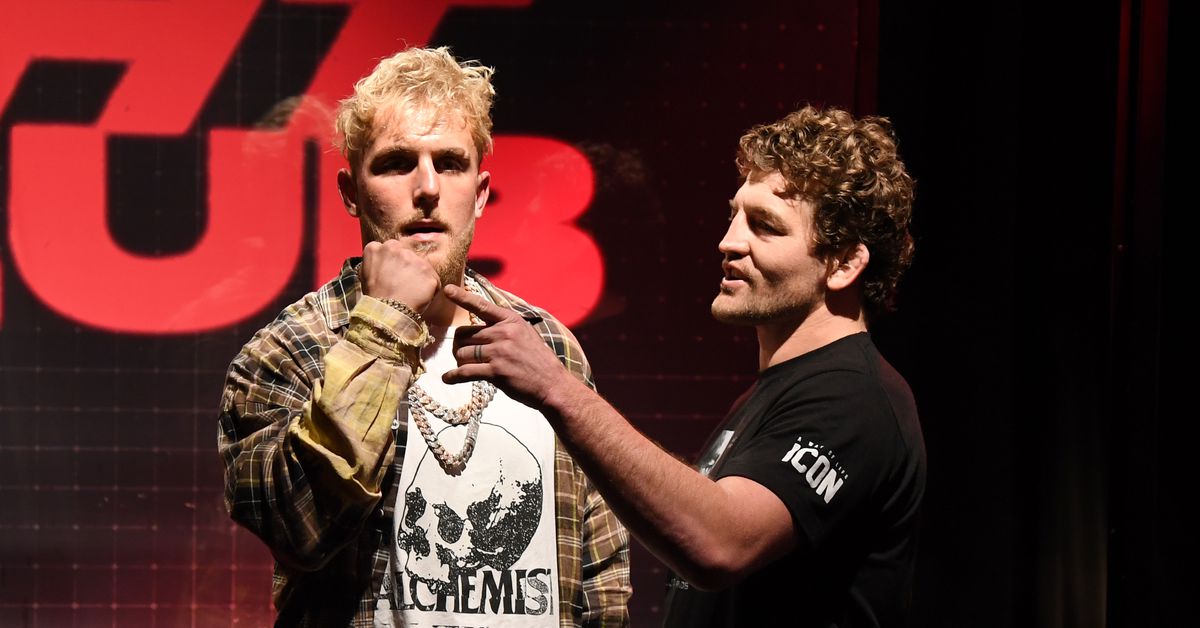 Friday’s press conference for the April 17 Triller boxing event headlined by YouTube star Jake Paul and MMA champion Ben Askren saw both competitors in full promo mode as they took verbal shots at each other while also taking questions from the media.

Paul attempted to make several digs at Askren’s credibility, specifically honing in on the July 2019 encounter between Askren and Jorge Masvidal at UFC 239. That contest ended in just five seconds when Masvidal caught Askren with a flying knee in round one to record the fastest knockout in UFC history.

During one exchange at Friday’s presser, Paul brought out his phone and FaceTimed Masvidal, who asked of Askren, “That dude’s still alive?”

When Paul continued to taunt Askren about the viral KO, Askren insisted he wasn’t bothered by it and said, “Jake, I know you have low self-esteem, but you don’t have to project it onto me.”

Paul then proceeded to replay a clip of the Masvidal-Askren knockout on repeat.

The fight was also referenced earlier in the segment when Paul was asked how he feels his boxing skills compare to Askren’s.

“This guy’s striking is that of a grandma,” Paul said. “Quite literally, if I put a grandma in against Jorge Masvidal, she would have lasted longer than this guy. He’s a good athlete, they say, but April 17 he’s gonna get exposed.”

On more than one occasion, Askren referred to Paul as a bully, which drew a profane response from Paul. Elaborating on the accusation, Askren went on to threaten that an unsanctioned fight between the two of them would end poorly for the YouTube star.

“I was talking to your mentality, you’re not gonna bully me,” Askren said. “That’s not gonna happen. You know, like, Jake if you and I ran into each other in the back alley in Las Vegas and I wanted to do a homicide—”

“Someone’s gonna stop me, you’ve got, like, 27 people,” Askren said. “Anyways, I would do a homicide on you if I wanted to.”

Askren retired from MMA competition in November 2019, following a memorable 1-2 stint in the UFC in which he also fought Demian Maia and former welterweight champion Robbie Lawler. Prior to joining the UFC, Askren was unbeaten in his first 20 fights, and he won titles competing for Bellator and ONE Championship.

Asked how his upcoming boxing bout with Paul compares to the competition he’s faced in the past, Askren was respectful, if not necessarily complimentary.

“I’m gonna take it seriously, but ‘the highest level of competition,’ not even close,” Askren said. “I’m gonna have fun with this, that’s what I came for. Jake thinks he’s a high-level boxer. I think he’s fairly delusional, I guess we’ll find out.”

For Paul, this will be his third pro boxing bout. He holds wins over fellow YouTube personality AnEsonGib and longtime NBA veteran Nate Robinson. Paul’s second-round knockout of Robinson at Triller’s Tyson vs. Jones Jr. event went viral this past November, vaulting his name to widespread notoriety in the combat sports scene.

Paul, in turn, showed respect for Askren’s accomplishments when discussing what a win on April 17 will do for his boxing career.

“This fight will give me a lot of credibility,” Paul said. “Ben’s 19-2, has less losses than [Conor] McGregor, two-time NCAA Division-I champ, Olympic wrestler, so yeah, he’s a real fighter. That’s why I wanted to do this fight, is to show the world this real fighter’s getting in with Jake Paul and he’s gonna get KO’d in two rounds.”

As for Askren, he joked that Paul’s famous brother Logan could be next.

“2021 seems like a tremendous year to beat up the whole Paul family,” Askren said.