NRL.COM
Share on FacebookShare Share on TwitterTweet
Brave Sharks fall to Eels after battling for full half without any interchange players 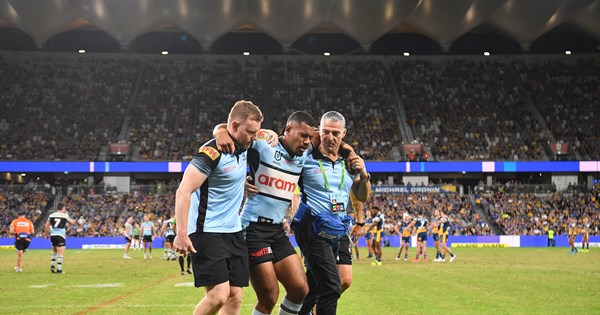 John Morris would support a concussion substitute rule being introduced after the Sharks bravely played without a bench in the second half of a 28-4 loss to the Eels.

A round of extraordinary injury carnage continued as Wade Graham, Briton Nikora and Will Kennedy all failed HIAs while Sione Katoa suffered medial ligament damage before half-time on Saturday night.

Parramatta also lost Mitch Moses to a head knock in the opening term at Bankwest Stadium and Maika Sivo later passed a HIA as a Blake Ferguson double highlighted their win.

Cronulla coach Morris believes the NRL should follow the lead of the NSWRL reserve grade competition and allow an 18th man to come into a team if a player is ruled out for the game after a head knock.

"If we're going to be really strict there and rule guys out with head knocks, we also probably need to be a little bit lenient around the plan if you lose three or four like we did tonight," Morris said.

"It probably makes sense. You see it in the [NSW] Cup – they've got the concussion replacement [and] the AFL have looked into it.

"When it first came out, I was 50-50 but now that I've experienced that sort of carnage [I've changed my mind] … You've got to realise as well, the 13 players who are out on the field, they're [out] on their feet. They need to be interchanged, they're carrying niggles."

Eels coach Brad Arthur is happy to keep things how they are.

"I know it was in our favour today, but my preference would be no [for a concussion substitute] at this stage," he said.

"I like that sometimes you've got to roll your sleeves up and sometimes you're going to have performances that build your whole season. Cronulla were brave-as tonight. They should be proud of their efforts."

Indeed, Morris was delighted with the grit shown by the Sharks despite the final scoreline not quite reflecting their heart.

"In 20 years of my experience as an NRL player and coaching the game, never have I seen a team go down to 13 players at half-time," he said.

"For them to hang on, they were just so brave and really showed what they're made of. I'm certainly just so proud to be their coach on a day like today."

Arthur prefers protocols stay as is

Morris expects Katoa, who scored the first try from a short-side scrum play on the wing in the sixth minute, to miss four to six weeks.

He was the third player in round three to suffer a significant knee injury after Roosters halves Luke Keary (ACL) and Lachlan Lam (MCL) went down against the Rabbitohs on Friday.

Fergo flipping his way to a double

And that's not counting a host of concussions.

Canberra had one man on the bench for 60 minutes for much of their defeat to the Warriors earlier on Saturday.

Ferguson got Parramatta on the board after a lovely flick pass from Marata Niukore before Sivo crossed for his 27th try in 25 matches at Bankwest Stadium to give the hosts a 10-4 half-time lead.

The Sharks held firm for an admirable period but tries to Ferguson, Reagan-Campbell-Gillard and Ray Stone blew out the margin.