Daily Mail
Share on FacebookShare Share on TwitterTweet
Richard and Judy Edwards were lucky to escape their Lennox Head home, northern NSW, with their lives before it burned down in the early hours of February 1.
Urgent warning over popular SUV which 'caught FIRE while switched off in a couple's garage and set the house alight' - as shocking footage emerges of another vehicle ablaze on a highway

An elderly couple's Hyundai Tuscon has ignited and burst into flames while turned off in their garage, their lawyer claims, as an urgent recall is issued for the popular SUV.

Richard and Judy Edwards were lucky to escape their Lennox Head home, in northern NSW, with their lives before it was gutted by fire in the early hours of February 1.

Three days later, Hyundai Australia recalled more than 93,000 Tucons made between 2015 and 2021 because a defect in anti-locking braking circuit board could spark a flame even when the vehicle is turned off.

But the car giant still claims the Tuscons have never caught fire in Australia.

Fire and Rescue NSW confirmed to Daily Mail Australia the blaze began in the garage where the 2016 Tuscon was parked, but were unable to determine the cause due to the extent of the damage. 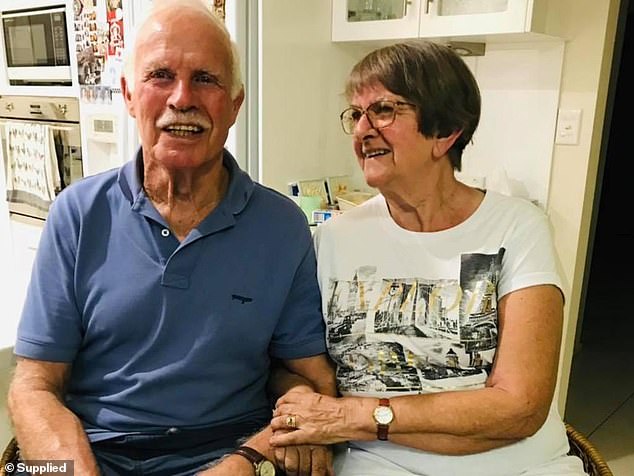 Pictured: Richard and Judy Edwards who lost everything in a house fire, which started where their Hyundai Tuscon was parked

The Edwards' lawyer Greg McBurney told the Daily Telegraph: 'The preliminary indications are that the fire did start in the vehicle … but we have to do our due diligence.'

He explained an independent expert arranged by the car insurer would assess the vehicle and determine whether it was the cause of the fire.

The couple, who spent their professional lives running a restaurant, 'pretty much lost everything', according to a GoFundMe page created to help them rebuild their lives.

'Unfortunately their contents insurance had expired. We need your help to assist them to buy new furniture, linen, crockery, utensils and other basic items,' the fundraiser read.

Another Tuscon owner, Zane Lewis-Hamilton, from Craigieburn in Melbourne, tried to take his nephew to school on March 18 in the car, but the vehicle wouldn't shift from park to drive. 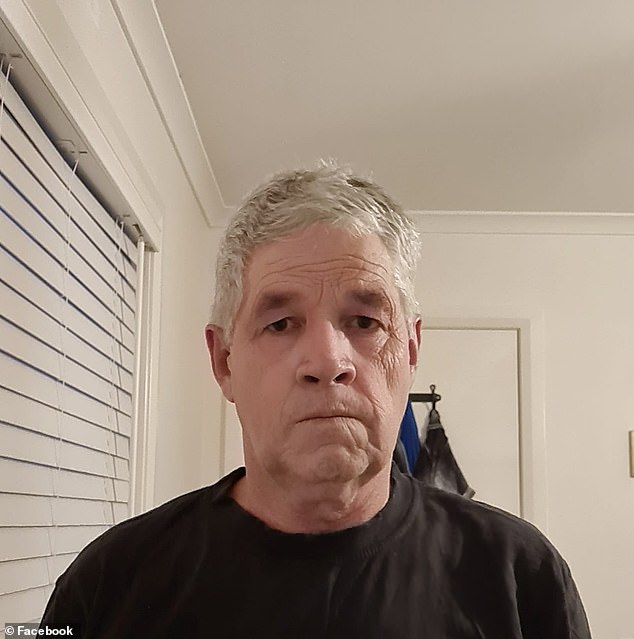 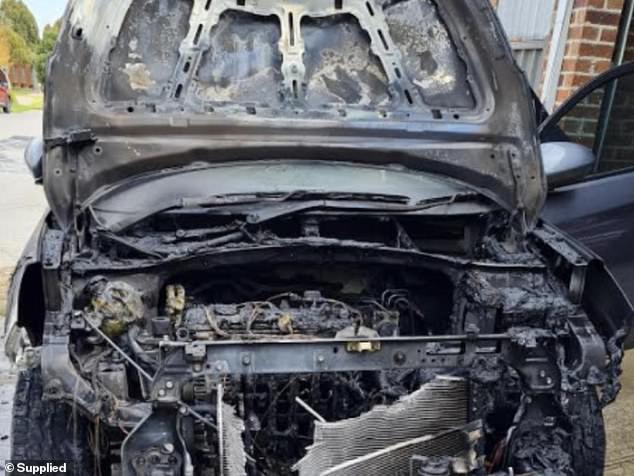 Mr Lewis-Hamilton called RACV roadside assist, but the car caught alight before they arrived (pictured: the Tuscon after the blaze)

He called RACV roadside assist, but the car caught alight before they arrived.

'I think people's lives are at risk,' he told the publication.

While the warning was issued only vehicles made between 2015 and 2021, Soraya and Justin Longdon's 2013 Hyundai ix35 - which was not included in the recall - also burst into flames on a highway on February 7.

The couple, who were driving with their young daughters, said the car stalled while accelerating around a semi-trailer on the M1 near Cowan, north of Sydney, when it 'cut out'. 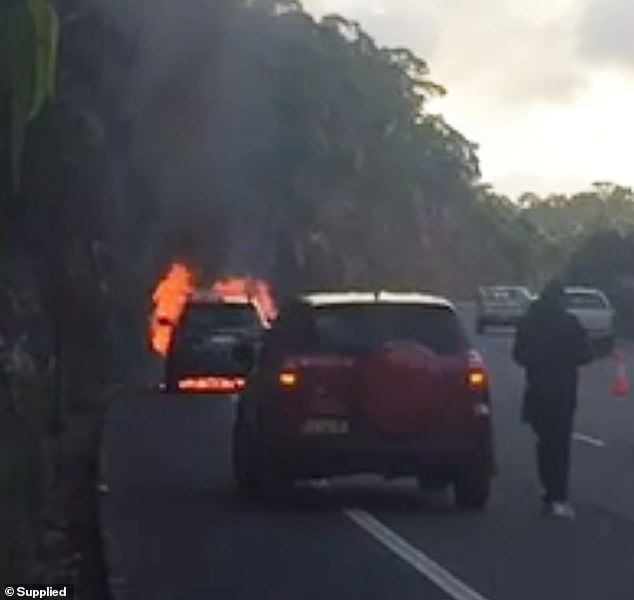 Mr Longdon pulled to look under the bonnet and check the battery connections, before unsuccessfully trying to start the car again.

When he looked under the hood again, he noticed flames under the engine.

Some Tucson vehicles may have an increased risk of an electrical short circuit within the ABS module when it is exposed to moisture, which can lead to a fire in the engine compartment.

The recall applies to certain Tucson models made between 2015 and 2021.

If the vehicle displays an engine warning light, drivers are urged to stop driving and contact their local Hyundai dealer.

Hyundai does not recommend parking the vehicle in a garage.

All repairs by Hyundai dealers are free-of-charge, and will take approximately 40 minutes to complete.

Motorists can check whether their car is affected by the recall by heading to the Hyundai site and entering their vehicle VIN number.

The Longdons grabbed their daughters Raina, age four, and Maya, nine months, and ran down the side of the highway just minutes before the car burst into flames.

In 2019 Hyundai recalled 8,200 ix35 models, made between 2010 and 2013 due to a defect that caused a leak in the engine oil, meaning the car could stall when travelling at high speeds.

The family's ix35 was not on the recall list, with a Hyundai spokesperson telling the publication that it was 'not affected.'

They eventually accepted an offer of $5,000, but they will still be left out of pocket even with their insurance payout.

'This was not our fault,' Mrs Longdon said. 'It's not fair.'

On Wednesday, Hyundai told worried customers on social media that the recall was a 'precautionary measure only, with no actual reported cases in Australia'.

One user wrote: 'Did two catch fire in Australia? When are the parts available to fix the fault? Meant to be end of February. This is a disgrace. It was my first ever new car.'

'How about we get our Tucsons fixed so we aren’t worrying about it catching fire, before showing off the new model?' one social media user commented,

'I love my Tucson but am a little paranoid and not happy.'