Talen Horton-Tucker with a dunk vs the Houston Rockets 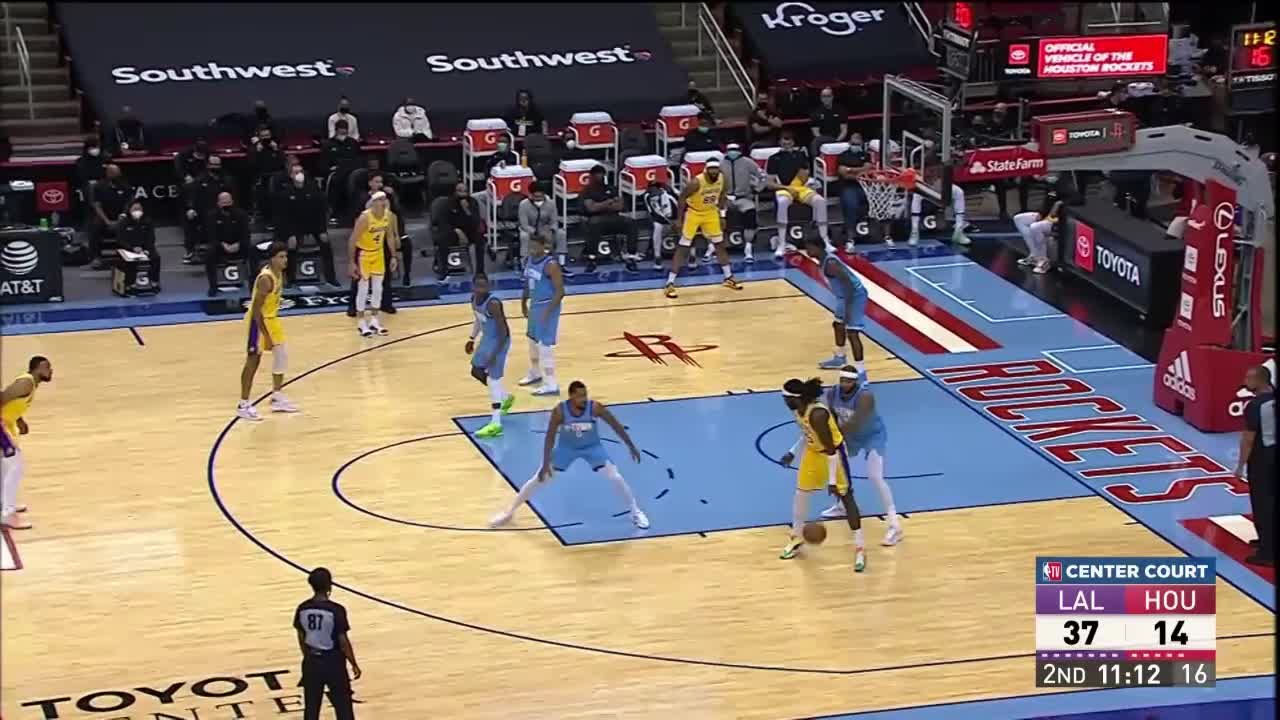 TORONTO — Mike Tyson is coming to the CFL. The Toronto Argonauts signed the American defensive back Wednesday, along with Canadian receiver Juwan Brescacin. Tyson is a former Seattle Seahawk who carries the same name as the former world heavyweight boxing champion. Brescacin, a Mississauga, Ont., native, re-signed with Toronto after joining the CFL club last year as a free agent. The six-foot-three, 222-pound receiver spent four seasons with Calgary (2016-2019), registering 69 catches in 44 games for 1,046 yards and six TDs. Tyson, 27, was a 2017 sixth-round pick of the Seahawks and spent parts of that season on the active roster and practice squad but saw no playing time. The six-foot-one, 210-pound Tyson also spent time with the Houston Texans (registering five tackles in 10 games) and Green Bay Packers. TICATS RE-SIGN VETERAN REVENBERG HAMILTON — The Hamilton Tiger-Cats have re-signed all-star offensive lineman Brandon Revenberg. The 28-year-old from Essex, Ont., started 17 games at left guard for the Tiger-Cats in 2019, earning his second consecutive CFL and East Division all-star appointments and being named Hamilton's most outstanding Canadian. The six-foot-four, 301-pound native of Essex, Ontario also suited up in both Tiger-Cats' playoff games in 2019, including Hamilton's loss to Winnipeg in the 107th Grey Cup. Revenberg has yet to miss a game due to injury in his four-year CFL career (2016-19), appearing in 71 regular season and five playoff games with the Ticats since 2016. Revenberg was selected by the Tiger-Cats in the first round, third overall, in the 2016 CFL Draft. BOMBERS BRING BACK WILSON WINNIPEG — The Winnipeg Blue Bombers have signed American linebacker Kyrie Wilson to a two-year contract extension. Wilson returns to the club for a fourth season. The native of Fresno, Calif., started every game for the Bombers in their 2019 Grey Cup campaign. He had 63 defensive tackles, three sacks, one interception, five pass knockdowns, three fumble recoveries and three tackles for losses. A three-year starter at Fresno State University, Wilson came to the Bombers in 2017 after signing with the NFL's Oakland Raiders as an undrafted free agent in 2016. RIDERS EXTEND MOORE REGINA — The Saskatchewan Roughriders have signed American wide receiver Kyran Moore to a one-year contract extension. The five-foot-10, 165-pound Moore had 966 yards and six touchdowns on 78 receptions in 2019. He added 119 yards in Saskatchewan's 2019 West final loss to Winnipeg. The 24-year-old made his CFL debut on Aug. 25, 2018 and had 32 receptions for 475 yards and one touchdown over 10 games that year. LIONS ADD CIOFFI TO SECONDARY VANCOUVER — The B.C. Lions have signed defensive back Anthony Cioffi to a one-year contract. The six-foot, 205-pound Cioffi spent the 2018 and 2019 seasons with Ottawa, recording 97 defensive tackles, 13 special-teams stops, four sacks, two interceptions and a defensive touchdown over 33 regular-season games. The native of Springfield, N.J., most recently recently worked out with the NFL's New York Jets after signing as a free agent in February 2020. REDBLACKS SIGN TWO INTERNATIONALS OTTAWA — The Ottawa Redblacks have signed Mexican kicker Jose Maltos and receiver Guillermo Villalobos. Maltos, from Monterrey, was the second overall pick in the 2019 CFL-LFA draft. Prior to the draft, he spent the 2018 season with B.C. In 2013, he was signed by the NFL's New Orleans Saints after playing college football at Universidad Autonoma de Nuevo Leon in Mexico. Villalobos, from Mexico City, was the 11th pick in the 2019 CFL-LFA draft. He made his CFL debut on July 25, 2019 against Calgary and went on to play in eight games during his first season. Before joining Ottawa, Villalobos played professionally in Mexico with the Mexicas, where he won a LFA championship, the MVP title and the 2019 award for best receiver. This report by The Canadian Press was first published Jan. 13, 2021. The Canadian Press