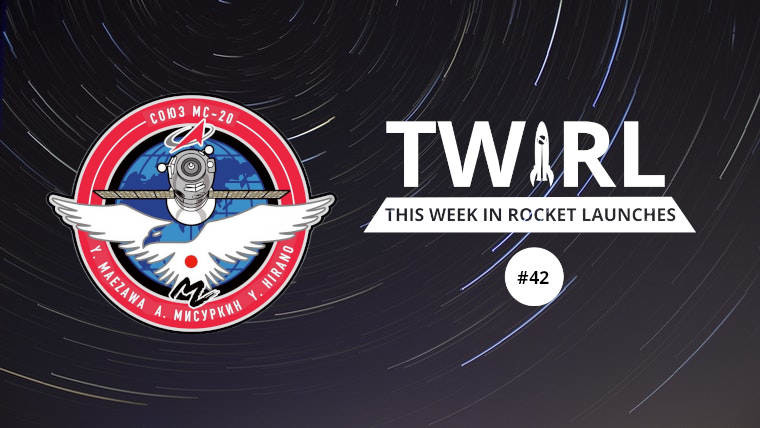 We’ve got a fairly busy week in space launches next week. Just months after Russia sent an actress and film director to space, it has said it will be delivering one cosmonaut and two space tourists to the International Space Station (ISS). We’ve also got a manned launch of Blue Origin’s New Shepard which will carry four paying customers and two honorary members

The first launch of the week takes place in New Zealand at 12:40 a.m. UTC. Rocket Lab will launch one of its Electron rockets carrying two BlackSky satellites into orbit. As always, the firm gave the mission a fun title, this time, it’s “A Data with Destiny”. We’ve covered BlackSky’s satellite constellation a number of times on TWIRL but essentially it’s an imaging constellation capable of snapping images of 1-metre resolution. Each satellite has a lifespan of three years if nothing goes wrong and in total, the company plans to operate 60 satellites at once.

The second launch of the week will take off from Kazakhstan at 7:38 a.m. UTC. A Roscosmos Soyuz 2.1a rocket will carry Russian cosmonaut Alexander Misurkin and two space tourists, Yusaku Maezawa and Yozo Hirano, to the International Space Station. The mission has been organised by Space Adventures, a private firm that has sent a number of people to space over the years including the man behind Ubuntu, Mark Shuttleworth.

This mission will not be delivering any crew members for an ISS Expedition, instead, the crew will return to Earth after 12 days on December 20. Of course, space travel sometimes leads to delays so they could be stuck up on the ISS a little longer if things don’t pan out as planned and they could miss Christmas.

Next up, SpaceX will launch a Falcon 9 rocket from Florida between 6:00 – 7:30 a.m. UTC carrying NASA’s Imaging X-ray Polarimetry Explorer (IXPE). The satellite will be placed in Earth orbit where it will study exotic astronomical objects and map the magnetic fields of black holes, neutron stars, pulsars, supernova remnants, magnetars, quasars, and active galactic nuclei. Using the X-ray radiation from the environments surrounding these objects, NASA hopes to learn more about their physics. IXPE is expected to have a mission life of about two or three years.

Also lifting off on Thursday at 3:00 p.m. UTC is Blue Origin’s New Shepard for its 19th mission. It will have a crew of six people including two honorary members. The honorary members are Good Morning America co-anchor Michael Strahan and Laura Shepard Churchley, the eldest daughter of Alan Shepard, the first American to fly to space. Among the paying customers are industry executive and philanthropist Dylan Taylor, investor Evan Dick, Bess Ventures founder Lane Bess, and his son Cameron Bess (who also streams on Twitch under the username MeepsKitten).

Similar to previous Blue Origin missions, the crew will spend a short amount of time in a low-gravity altitude so that the crew can experience weightlessness, it will then plunge back to Earth until the parachutes open up to and gently bring it to the ground.

The final launch of the week will also set off from Kazakhstan. Roscosmos will launch a Proton M rocket at 12:09 p.m. UTC carrying the Ekspress AMU3 and Ekspress AMU7 communications satellites for the Russian Satellite Communication Company. The orbits will be placed in a geostationary transfer orbit where they will provide advanced communications, television, and radio broadcasting services.

The first launch we got in the last week took place on Thursday. SpaceX launched a Falcon 9 rocket carrying 48 Starlink satellites a two BlackSky satellites into orbit.

While not a launch, Rocket Lab gave us a development update for its next rocket known as Neutron. If you’d like to see what the firm is up to, check out the video below.