IndieWire
Share on FacebookShare Share on TwitterTweet
LGBTQ viewers can now enjoy their very own cheesy Christmas movie, just as straight ones have for decades. Ah, progress.

It is a truth universally acknowledged that a gay man in possession of a television in December, must be in want of a cheesy Christmas movie. Whether cinephile, theater lover, or “Drag Race” connoisseur, everyone enjoys something silly to half watch while wrapping presents — and no gay can resist the divine decadence that is Jennifer Coolidge. Enter “Single All the Way,” a cheesy new holiday rom-com debuting on Netflix. Though the title may be the cleverest thing about this cookie cutter affair, it’s refreshing to see a gay family film that doesn’t use its characters’ sexuality for dramatic conflict. Gayness isn’t some problem to be concealed, fretted about, or made fun of here, it’s merely part of the given circumstances. Nor is gayness window dressing, cliche-ridden, or milked for comedy. As thoroughly unproblematic a gay Christmas movie as there ever was, unfortunately “Single All the Way” doesn’t leave room for much else.

Led by twinkle-eyed “Ugly Betty” star Michael Urie, “Single All the Way” follows a perpetually single man, Peter, who brings his best friend Nick (Philemon Chambers) home for the holidays. The plan is to tell Peter’s family that the longtime friends and roommates finally professed their love for each other, which of course would be a huge lie and completely unlikely (you can see where this is going). When they arrive to snowy New Hampshire from their busy L.A. lives, the jig is up before it begins because Peter’s mother (Kathy Najimy) has nabbed Peter a blind date with her hunky spin instructor James (“Brothers and Sisters” star Luke Macfarlane). 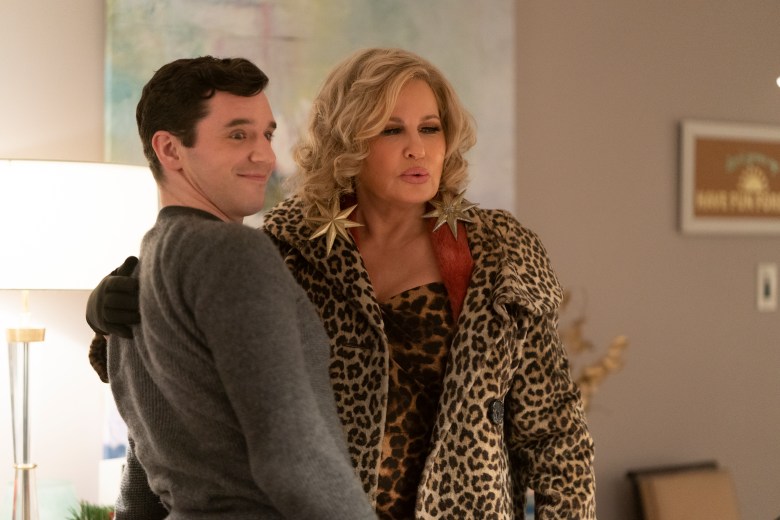 Michael Urie and Jennifer Coolidge in “Single All The Way”

As Peter and James begin a promising courtship, Nick happily makes inroads with the family, designing an elaborate Christmas light display and spending more quality time with the nieces and nephews than Peter. Turns out, Christmas Carol (Mom’s preferred name for all of December) isn’t the only yenta in this gentile family, and soon the whole family is conspiring to get Peter and Nick to see that they are fated to be together. The nieces and sisters (way too many to count or distinguish from each other) decide to rope the boys into helping eccentric Aunt Sandy (Jennifer Coolidge) with the Christmas pageant, which is quickly floundering under the crushing weight of Aunt Sandy’s unrealized ambitions.

Though the dialogue is surprisingly low on actual jokes, Coolidge delivers one of her most unhinged comedic performances. She seems to have completely shed any inhibitions, if she ever had any, deciding to squeeze every drop of fun out of the low-stakes material. Interpreting the assignment in a zany dimension all her own, she digs delightfully into a guttural baritone — a far cry from her typical middle-aged ditz breathiness. The funniest scene in the movie involves her playing every part in the pageant like some sort of deranged one-woman show.

The closest comparison for “Single All the Way” is Hulu’s “Happiest Season,” which hit home TVs last holiday season to terrible reviews despite hailing from queer actor-turned-director Clea Duvall. In spite of the critics, or perhaps to spite them, “Happiest Season” earned plenty of views, though many would have tuned in to see Kristen Stewart play gay in anything. Netflix shrewdly noticed Hulu racking up the watches and sparking online conversation, even though the collective response to the movie was a universal eye-roll (from anyone other than teenage girls, at least). With such a low bar to surpass, Netflix bet smartly on “Single All The Way,” and it didn’t even have to pay movie star salaries. Netflix gets its views, LGBTQ audiences get mindless holiday fare, and the world gets more Jennifer Coolidge. Ah, progress.

“Single All The Way” premiered December 2 on Netflix.

Sign Up: Stay on top of the latest breaking film and TV news! Sign up for our Email Newsletters here.