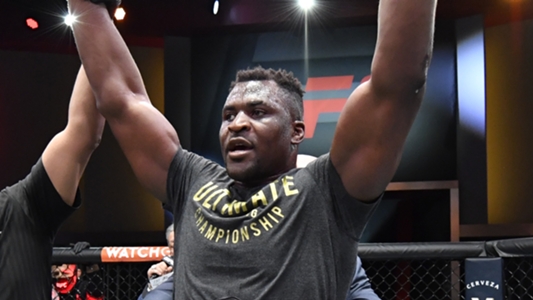 Miocic's left eye seems to be bothering him. Ngannou lunges forward and drops Miocic with a left cross. Miocic is in a world of trouble! He's unloading on Miocic against the Octagon. Now, Ngannou drops Miocic with another left! Miocic is bent backwards at the knees. Ngannou finishes it in brutal fashion with a hammerfist! Herb Dean rushes in to save Miocic. It's over! The winner and new champion of the world, Francis Ngannou!

And here comes the champ

Miocic looking extremely confident, as he'll try to make it 2-0 over Ngannou. The fact that Miocic, the champion, enters this bout as the underdog has got to irk him. Let's see how he responds.

The 34-year-old's emotional, moving journey can reach its highest note with a victory over Miocic to become the heavyweight champion of the world.

The rematch we've been waiting for is minutes away. Will Miocic double down on his domination of Ngannou or will "The Predator" make the greatest heavyweight champion in UFC history his prey? We're about to find out.

"I think Nate is a perfect fight," Luque declares after his big win. "Let's go!"

Woodley comes right out, grapples and mashes Luque up against the cage. Now, he lets his foot off the gas and it's Luque pressing Woodley up against the Octagon. Woodley tags Luque with a stiff right hand. Moments later, Woodley nearly drops Luque with a solid right behind the ear. Luque remains composed and blasts Woodley with an overhand right! Woodley is hurt bad. His legs are jelly.

Luque unloading a barrage of punches on Woodley, who's up against the cage in trouble. Ref leans in to take a closer look. Woodley, standing on jelly legs, falls to the mat. Luque is looking for a submission. He catches Woodley with the d'arce choke and clamps it on strongly. Woodley taps! It's over.

Vicente Luque has made his way into the Octagon and here comes Tyron Woodley. This welterweight clash is minutes away. Woodley enters on a three-fight skid, which he'll be looking to snap tonight.

That was a dazzling performance from O'Malley, who's as talented a striker that you'll see in the UFC. However, he possibly could have finished the bout in the first round when he dropped Almeida. But instead of pouncing on him, he stopped and admired his work. It didn't backfire on him tonight, but it can in the future. If O'Malley has a future opponent in a similar position early, let's see if he'll close out the show.

O'Malley spending the third round sticking and moving, landing crisp shots at will. He's landing whatever stinging shot he wants, whenever he wants. And BOOM! O'Malley drops Almeida with a short left hand. O'Malley pauses and admires his work again. Then, he walks a couple of steps forward and detonates a savage overhand right onto a fallen Almeid for the walkoff KO. The way O'Malley just casually walked over to a fallen Almeida before finishing him was devastating.

Third and final round

Sure enough, this one is going into the third round. O'Malley is still in complete control, though.

O'Malley launches a head kick and blasts Almeida in the temple. O'Malley then throws one punch and Almeida is slumped up against the Octagon. O'Malley admires his work instead of finishing Almeida. He wanted the walkoff KO badly, but if this one goes the distance, O'Malley is going to be kicking himself for not pouncing on his opponent and ending it right there.

Sean O'Malley is making his walk to the Octagon

O'Malley's bantamweight bout against Thomas Almeida is next. O'Malley is expecting to be kicked by Almeida, but is vowing to deliver a knockout as his response. O'Malley is coming off a first-round TKO loss to Marlon Vera in August.

Constant pressure from Maverick, whether she was coming forward with striking or taking Robertson down, spelled the difference. Maverick was just too much for Robertson to handle. Excellent showing from Maverick. Judges had it 30-27, 30-27 and 29-28 in her favor.

Maverick all over Gillian Robertson in this first round on the feet with her striking and scoring two takedowns as well. The second takedown came during the waning seconds, when Maverick used a brilliant level change before bringing Robertson down to the ground.

Women's flyweight action is up next

Gillian Robertson believes that she has all the tools to overwhelm Miranda Maverick in the Octagon. How is this one going to pan out?