CBSSports.com
Share on FacebookShare Share on TwitterTweet
Ngannou pummeled the most accomplished heavyweight in UFC history with ease in the rematch on Saturday 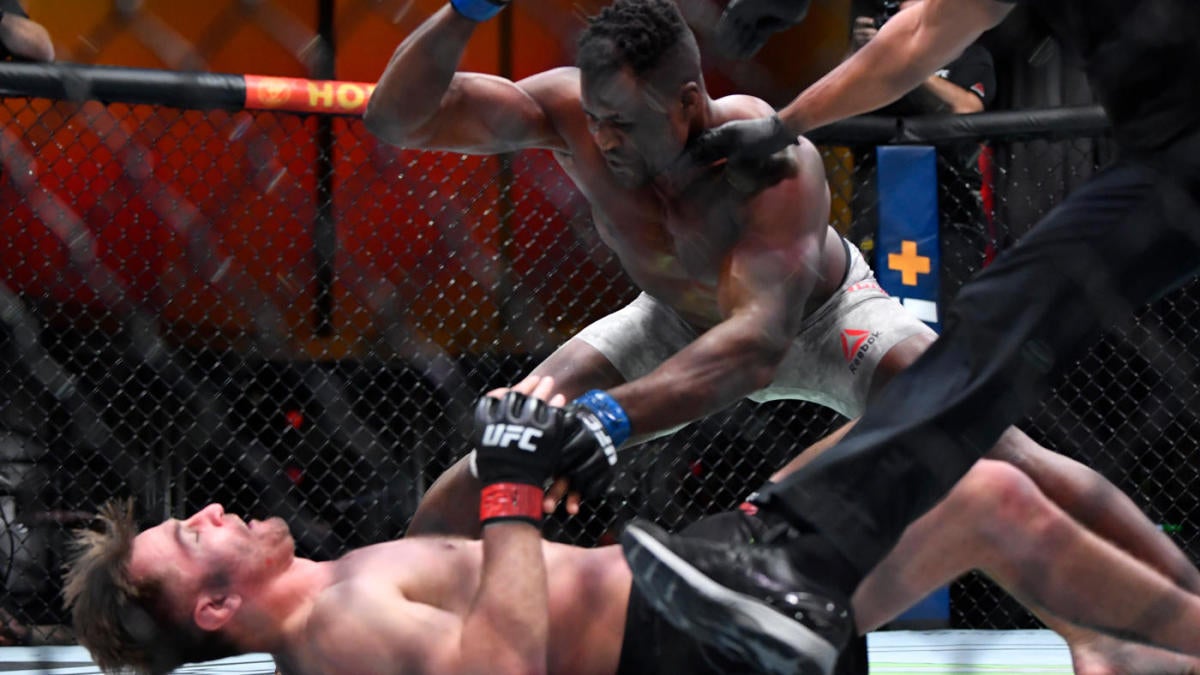 Francis Ngannou couldn't get the job done in his first shot at Stipe Miocic and the UFC heavyweight championship at UFC 220. In the main event of UFC 260, Ngannou left no doubt that he had become the best heavyweight on the planet, knocking out Miocic with a brutal sequence of strikes in the second round to claim heavyweight gold.

Ngannou cracked Miocic several times in the first round, landing massive punches that Miocic absorbed while seeming unaffected. Rather than panic, Ngannou rode forward to the second round, landing a big jab that sent Miocic stumbling to the cage. Moments later, a crushing left hook sent Miocic to the canvas and a follow-up hammerfist on the ground left Miocic out cold at the 52 second mark of Round 2.

The finishing sequence almost seemed as though it was taking a sudden turn. As Ngannou attempted to follow up on the jab that rocked Miocic, Miocic was able to land a heavy counter punch that seemed to stumble Ngannou. As Miocic attempted to charge forward, that was when Ngannou unleashed the brutal hook that sent Miocic crashing backward with his leg bent at an awkward angle to set up the finish.

"He did a mistake of following me, maybe he thought I was hurt or something," Ngannou said of the finishing sequence. "That's when I caught him. We've been putting in a lot of work, we've been working on everything. Every day, we've been working on those things. I worked every day and learned to relax and get the best out of myself instead of going out and rushing."

Ngannou also spoke after the fight of the learning experience that was his first battle with Miocic, a fight that Miocic won by breaking down Ngannou with solid grappling. Ngannou impressively sprawled to defend a Miocic takedown attempt in the first round, pivoting to Miocic's back and landing a sequence of heavy punches.

"That night was the biggest night of my life," Ngannou said. "It might sound weird to say this, but I knew I didn't lose that fight by the way of how I gained experience and learned about mixed martial arts and how to manage a fight. I had a great outcome from that fight. It was a great benefit from that fight and I believe that benefit pushed me higher."

Ngannou is now riding a five-fight winning streak, all by knockout and could be set to face former longtime light heavyweight king Jon Jones in Jones' debut in the heavyweight division. After the fight, Jones initially tweeted "Let's play baby." He then deleted the tweet and replaced it with a more to the point "Show me the money."

Can't get enough boxing and MMA? Get the latest in the world of combat sports from two of the best in the business. Subscribe to Morning Kombat with Luke Thomas and Brian Campbell for the best analysis and in-depth news, including instant analysis of UFC 260 at the conclusion of the event below.

Ngannou addressed the potential challenge of Jones immediately after his win, suggesting he'd be ready for the fight in short order.

"For my opinion, Jon Jones is the greatest of all time for mixed martial arts," Ngannou said. "Him moving up is going to be a good thing. He's a challenge I will take and will be very good on my resume. But this time he will be the challenger, I'm the champ. He's coming up looking for me. I will be here ready to fight in July or August."

CBS Sports was with you the entire way on Saturday bringing you all the results and highlights from the UFC 260 below.